Wow, it's been nearly a month since I've written. I haven't worked all that much in Maya, I've been doing other creative stuff. I did play around with shaders the other day, animating them. I was trying to get a Len Lye type animation out of animating them, but it didn't quite turn out the same way. I decided if you stared at it long enough, you might just have a seizure ala Japanese Pokemon LOL and so that's why I've not posted it.

Email ThisBlogThis!Share to TwitterShare to FacebookShare to Pinterest
Labels: art As some of you may know, I'm currently seeking employment. This morning I received an email from Collision Studios. They wanted me to take a rigging and animation test and had sent me a shark model to do just that with. They said they send the test to all candidates. No better way to get me to work! I had it rigged in about two hours, if that, and started animating on it right away. I finished animating it about dinner time and decided to make a playblast of it and put it on my blog.

Okay, so I have to admit that I've not worked on anything in the last couple days. I've got my computer up and running and everything is back in order, but I've been busy getting things ready for hunting season which starts this weekend. I had intended to study some C++ today, but the day sorta got away from me.
Posted by T. at 11/04/2010 08:06:00 PM No comments:

My hard drive died yesterday so it might be a few days before I post another update. I had to go buy a new drive and I'm still in the process of getting everything installed on the new drive.
Posted by T. at 11/02/2010 04:11:00 PM No comments: 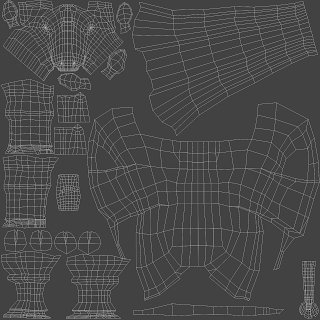 I wanted to write about how I did the spots on the giraffe to make them seamless. This process is different in Maya than how I would or could have done it in 3ds Max. In 3ds Max I would have painted the spots in Photoshop first, and then used render-to-texture to render out the seams so that I could paint them and then overlay them in photoshop. Maya has a 3D paint tool however, and this made it simpler in many ways than having to paint over the seams. 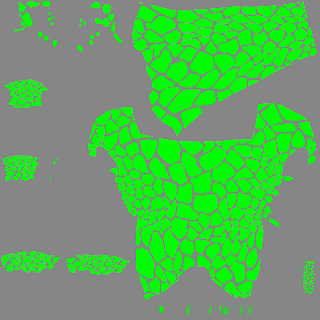 I painted spots on the giraffe model itself using compositor's green. That way I would have a guide to paint by in photoshop. Maya saves out a .tif file that has what you've painted on it. To the left is the file that Maya saved out with the green spots that I painted on it.

After opening this file in photoshop, I was able to use the 'magic wand' select tool to select only the green and then I could paint the spots where the green was. This assured me that the seams would line up. This worked like a charm, and here is the final map with the texture painted on it. 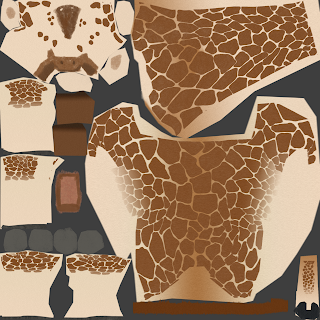 I left my computer to render last night and it was finished this morning. I've uploaded the rendered version to youtube. The only problem with youtube is the quality is a bit worse than if I hosted the video myself because they're compressing an already compressed video, but I would probably eat up all of my storage space on my website if I hosted every video there. I also can't really get the quality any better (i.e. uncompressed) because of our internet connection. We live way out in the country and all we have is mobile wireless, no cable, no DSL. So, it is what it is :)

I didn't get all of it rendered, but did get the last half done so I thought I would go ahead and post it. I merged the last rendered half with the first portion as a playblast so you can see the rig. I will post the fully rendered version tomorrow.

Youtube has some strange artifact-ing going on in a couple of frames, and that is not there in the original. I guess it's their compression. I would try to upload it again, but we have a fairly slow mobile wireless connection so I'll just live with it.
Posted by T. at 10/29/2010 07:39:00 PM 1 comment:

After all that rendering I found a problem with the back leg, it's a bit wrong. I'm going to work on it some more, and maybe get the animation posted tonight. Maybe I'll just post the playblast as soon as I'm done, and then I can post the rendered version whenever it's finished. I'll see, our internet is being really slow today. I didn't see the problem with the leg until I saw the rendered version, I think the shadows accentuated the problem. It's a good thing, I want it to be right.

I need a render farm LOL

I've finished a walk cycle for the giraffe, and I was hoping to post it tonight, but that ain't going to happen. It's after midnight and there's still over a hundred frames to render. I will post it tomorrow, hopefully early in the day, and then I can get back to work on the temple room that I designed.
Posted by T. at 10/28/2010 10:19:00 PM No comments:

I thought that I would start a blog to keep up with what I'm working on at the moment. I decided last night to model a temple, I had an idea in my head of how it should look, but then my computer went a bit crazy, and I had to run check disk. Long story short, I had some bad sectors on the hard drive, it seems to have recovered my files and everything seems fine, for now anyway. I guess I need to look into getting a new hard drive.

I have been updating my website with what I'm working on, but it's a bit cumbersome to edit the html code every time I want to update, blogger is so much easier.

The latest thing I've posted on my website is a rotation of the giraffe model I did.