This is the first drawing I did with Adobe Sketchbook Express. I did this with my finger LOL I have ordered a Wacom Bamboo stylus and am going to download the Pro version of Sketchbook. I have never been very good at drawing on a regular wacom tablet, I'm much better on paper. I suppose it's because it's hard with a tablet to see what you're doing (hence wanting a cintiq). I think that winning the iPad2 might be the best thing that's ever happened for my traditional drawing skills :)
Posted by T. at 10/25/2011 12:59:00 PM No comments:

...that I haven't come up with a name for yet. It just sorta popped into my head the other day, and so I started working on sketching and fleshing it out. I did a rotation today and wanted to post it. The character's clothing is based loosely on what early 20th century pilots would have worn. I'm thinking the character needs a zepplin as a prop.

Next step, I'll be modeling and texturing it in Maya. And hopefully come up with a name...

This is my first attempt at animating in Flash (version CS3). It's a simple and cartoony spider building a web. I would like to do a more detailed version now that I understand how flash works. I would also like to do a different aspect ratio next time. I accidentally went with the default size and would prefer to work at 720x480.

If you know me, you know I'm primarily an animator and rigger, but I decided that I like modeling too and would like to improve. That is why I started modeling things for TurboSquid. I think my modeling has improved immensely since I began doing that and so the other day I decided to model a human. I've started it and when I have the preliminary geometry done, which I'm hoping will be later today or tomorrow, I'll post a render.
Posted by T. at 6/04/2011 10:50:00 AM No comments:

I decided that rigging an umbrella would be interesting, and so I've done a patio umbrella, it's available at turbosquid.

The hardest part was figuring out how to make the umbrella's arms work. I tried various constraints without hitting on anything that worked the way I wanted it to, so I put the model aside for a day and then it hit me at some point that using IK would work. So that's what I did. It works like a charm too.

I went looking for some t-shirts with medieval themes, but found few that were any good. Here's one I started last night and finished today. It's for sale on children's and adult's t-shirts at cafepress.com.

I modeled something pretty cool today, an oriental fan! It's available for sale at turbosquid.com. I'm very happy with how it turned out. It took me a while to work out how I was going to get the paper part of the fan to deform and I tried two methods before finally figuring out what worked. Check it out, there are .mov files over at TurboSquid that show it deforming. 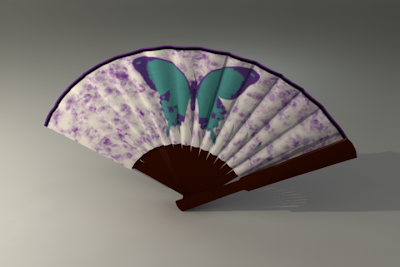 After posting the instructions on how I made the old facial rig I designed, I decided that I would re-design it. I had already taken some of the 11 Second Club's models for my students to rig, since they're such nice models and work so well for animation and facial animation. The geometry is also clean and simple enough that they're easy for my students to work with. I like the model that they designed for the club, and after stripping the rig out of the model in Maya, I exported the model as an .obj to 3ds Max.

I started it by adding some shapes where I wanted deformation, I added some helpers and constrained them using position constraints and look-at constraints. I liked how it was moving, and then I walked away and slept on how I was going to hook all that up to some kind of interface that would make it easier for an animator to work with. The next day, yesterday, I got back to work on it, and had the brilliant idea of using a Position List with multiple XYZ Positions instead of using a ton of helper nodes. That in and of itself made the rig much smaller, with much fewer nodes.

If you're interested in more details about how I did this, some of it is similar to the tutorial I posted earlier, or just drop me a line.

I thought I would put this tutorial that I did for a facial rig online. It's a little old, and probably could be improved upon, but it worked well, including working for export to the Gamebryo Game Engine.

This is the most amazing thing ever and I am so excited about it.

Google is mapping museums the same way they've mapped all the streets. You can walk through and see works of art in great detail. They've not mapped the entire National Gallery in London yet, so they've not made it to my favorite piece which is Meindert Hobbema's Avenue at Middelharnis, but I'm sure they'll get there eventually. This would have been a great tool to have when I took Art History. It was often hard to find works of art, and when you did, they were often a little black and white picture in a book. Check it out.
Posted by T. at 2/01/2011 09:14:00 AM No comments:

I figured it was time for a new demo reel. I put some of the recent stuff I've been working on, on it. There's no sound, my internet is so slow, it takes long enough to upload without it, and is superfluous anyway.

I decided to animate my cave girl character running with a spear in hand, as I mentioned earlier. This started with research, with my mother-in-law and I running across the deck with a wooden curtain rod in hand LOL I'm thinking if the neighbors on the hill saw us, that they'd think we lost our minds.

It took me a few hours to get it polished up. I like it and Andy liked it too. He said she had character, which is great!

Next I'd like to animate my cave girl throwing the spear. And get around to modeling her saber tooth cat friend. There's just not enough hours in the day. I work on my art and it's bedtime before I know it.
Posted by T. at 1/23/2011 09:07:00 PM No comments:

I did another walk cycle with the Cave Girl I modeled. This one I spent more time on than the first one, which was hastily thrown together just to see how the character was moving.

I'm going to do some more animation with her, a run cycle and maybe have her carrying and throwing a spear. That's my plan anyway.

I designed a saber-tooth cat to go with my cave girl. I'm going to model it soon, but I like it so much I decided to put the drawing of it I did on here. I went through about four iterations, some of the first ones looked too dog-like, and while a saber-tooth dog would be amusing, it wasn't quite what I was going for.

I designed a cartoon-y cave girl last week. I modeled and UV'd it in Maya 2008, and then decided to get 3ds Max's free 30 day trial and I rigged and animated it in Max. I am going to work on it some more. I'd like to get the lighting better, as I know nothing about the proper render settings in Max, having only worked in Game Dev with Max, where everything was exported to Gamebryo. The movement is also a little stiff I think, but I'm tired and it's late so I'll work on it some more tomorrow or maybe the next day.

Tomorrow is the first day of school, except I'm not a student this time. I'm teaching a rigging class! I hope it will be fun...

I decided to model my beautiful .243 Winchester Model 70 Featherweight. Here are some renders:

Click for the larger version. Available for sale at TurboSquid.

I never realized how complex the bolt was in it until I started looking closely at how it worked. And that explains why bolt action firearms are a fairly recent invention!
Posted by T. at 1/15/2011 11:50:00 AM No comments:

I drew a couple of pictures for my uncle-in-law and aunt-in-law for Christmas: